Starting from today our reports will come on Tuesday. Monday is dedicated to the InstantBuy report and to get all the things Midas done during the last week gathered up with short-term plans finishing.

Our development team is working hard on the creating the two last modules of the exchange. The first one: database. This is kinda boring. We need to polish it to be working like a clock to make sure our first part of the core will not lead to any unexpected bugs.

The second part is matching algorithm. This one was really tricky. The exchange took so long, because in the first iteration we outsourced this part of a code to the professional that worked on a few crypto-exchanges. But this algorithm was written in another language and if something would go wrong, our Chief Technical officer would not react on it fast enough to fix the problem. Therefore, we had to rebuild the algorithm on the native language of our platform.

Another difficulty we faced is that our matching order component should have a lot of unique stuff, such as provide mining. And for further developments it needs to have some radical features too. All of it takes time to prototype, execute and test. I think, we can finish matching algorithm in a week, but the fundamental planning error is hurting the most.

The front-end is ready for deployment. Once we finish with those two things, exchange is up for alpha test.

Last week we worked a lot on preparing everything for the release of the next Burn-out. It will not have any radical changes, just some adjustments for getting the non-masternode audience in.

Our marketing department finished with the video for Burn-out promotion, partnered up with many CPA networks (Call-per-action) and finished the banners for other teams to use and make money on our programme.

Meanwhile, we have started a bounty for video review of Burn-out. Also, starting from today we will pick someone from those who activated Burn-out and will put additional 10 Midas.

Once the front-end for the Burn-out landing page is finished, we are going to release it.

Our analysis showed that it is the easiest way to promote our platform. Through the coin. Since we are on Coinmarketcap right now every growth of Midas coin is not getting missed and brings us more and more people.

We have some fresh ideas on how to promote our coin. You will learn about it later on, while we prepare the fundament. Needless to say, that Midas coin is now listed on every possible site that is available after CMC listing.

I have started working on the new whitepaper, which firstly will go as a presentation of Midas coin. Then it will be broaden to the platform vision and Midas coin role in it.

We have finished with back-end, but the Bitmex API is not working as it should with it. Fline team is working on fixing it. Once it is finished, the backend will be ready and we start designing and front-end the new dashboard. It should not take long.

With the new dashboard we will have some major updates for Fline bot management.

Whirlwind, the bot creator, is working on the hardest and biggest stuff right now — take profits with re-entering the trades. The current market conditions provide a lot of opportunities on getting big +10% wick profits and then reenter the trade at the same point. So, this is our goal for now.

The bot entered a confident long on 9k level, so we are waiting, how it will end up. 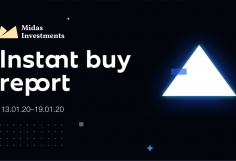 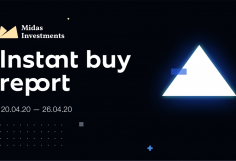