In December of 2017, Bitcoin’s price reached a new high of $20,000 following a year-long uptrend that began under $1000. This represented a 2000% price increase – a number that is unparalleled in traditional investment markets and indexes. Along with this price uptrend came an influx of new investors, media coverage, and widespread interest in blockchain.

Google trends show that internet searches for “Bitcoin” “Blockchain” and “Crypto” all parallel the price action of the crypto market. On the surface, this seems to make sense. Since Cryptocurrency is a peer-to-peer market, one could logically conclude that price action would strongly correlate to consumer interest due to the valuation being driven solely by demand. High interest in Crypto (represented by high google searches) would indicate high demand – and thus, a high supply.

The charts provided by Google confirm this correlation. Let’s take a look:

Notice how the charts seem to imitate one another. In December of 2017, both the search action and price were at an all time high.

Now let’s take a look at “Blockchain” and “Crypto”.

The concept begins to break down in 2019 when Bitcoin began a resurgence. In April of 2019, Bitcoin broke out of its 15 month downtrend, beginning a (relatively) small uptrend that started around the $3k mark and reached ~$14k. This represents roughly a 450% increase (a modest bull run by BTC standards). However, this price action is not accurately reflected in the search volume for Bitcoin.

Either a bubble formed, or the search volume had a higher conversion rate – turning researchers into investors more efficiently. However, with search volumes nearing the low level seen in the thick of the 2018 bear market, the bottom may not be in yet.

Always do your own research before investing. 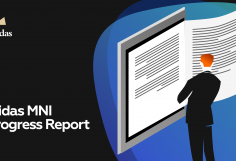