What is Convex Finance CVX? 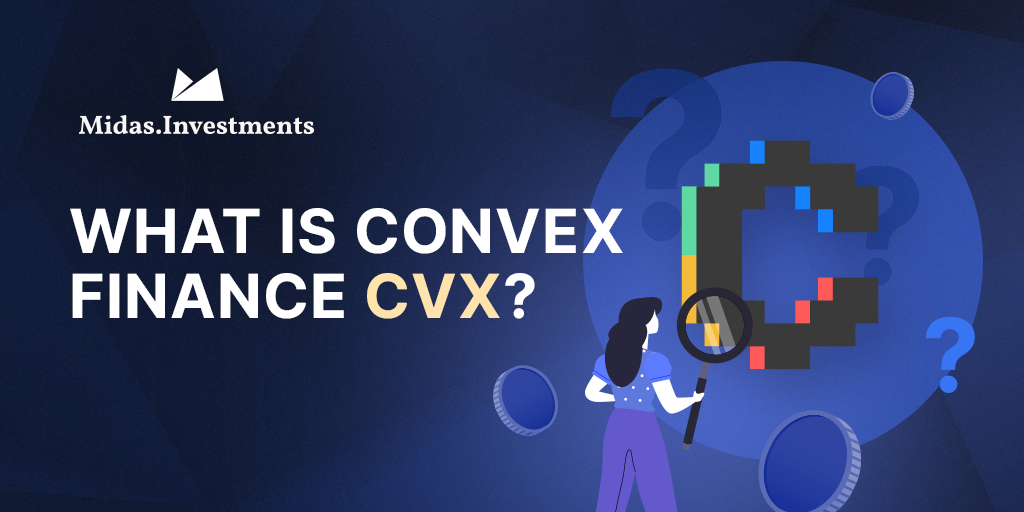 Last month, we announced the listing of Convex Finance (CVX) onto the Midas platform. Holders of CVX tokens can enjoy a 23% APY return, paid back in CVX tokens – making it one of the highest yielding tokens available on the platform. CVX was the first variable rate listing – meaning that its APY can fluctuate with market conditions, depending on the staking rate of CVX. Midas generates CVX yield by staking CVX on behalf of users through the Convex Finance platform.

But what exactly is Convex Finance? In this article, we’re going to take a deep dive. Let’s get started!

Convex Finance is a yield-aggregator platform for Curve Finance – one of DeFi’s biggest decentralized exchanges. In order to understand Convex, we must first understand Curve – the platform upon which Convex is built.

Curve is mainly known for its favorable rates when trading stablecoins, and for the attractive returns that users can earn for providing liquidity to the DEX. When users deposit their stables into a Curve pool, they are providing their funds to be the counterparty to trades through the exchange. In return, they earn trading fees and incentives in Curve’s native governance token, CRV.

The fees earned through liquidity provision are automatically compounded into the pool, but the governance tokens are not. If a user wishes to reinvest, they must claim the CRV (a taxable event), sell the CRV (another taxable event) for stablecoins, and then deposit those stables back into the pool. Not only are these events taxable, but the process itself is extremely time-consuming and can be extraordinarily expensive to process these transactions on the Ethereum network! This is where Convex Finance comes in.

Convex is a yield-aggregator, meaning that a user can stake their Curve LP tokens on the platform and it handles all of the compounding automatically. Further, it adds an additional incentive on top of the rewards in the form of CVX tokens, the governance token of Convex Finance.

Therefore, yields on Convex are even higher than what is available on Curve due to these additional incentives. This is why Convex Finance has attracted so much TVL – over $14.8 Billion at the time of writing!

But that’s not all. Curve’s platform also has a veCRV (vote escrowed CRV) tokenomic model. Users can lock their CRV tokens for up to 4 years and vote on which pools receive CRV incentives, and boost their own earnings up to 2.5x! These CRV that are locked cannot be unlocked early, nor can they be traded. That’s where cvxCRV comes in.

Instead of locking CRV on the Curve platform, users can lock through the Convex platform and receive cvxCRV instead of veCRV. Convex holds the veCRV in the background, and rewards cvxCRV – a tradable version of veCRV – to the depositor. cvxCRV earns trading fees from the Curve platform (same as veCRV), earns CRV as a share of Convex’s platform fees, and receives CVX rewards as an added incentive. At the time of writing, Convex is offering over 38% APR on Curve deposits. The veCRV that Convex holds in the background boosts the pools on Convex, making the Convex platform even more profitable for users.

How Convex Finance Earns Their Money

Similar to CRV, CVX can be locked to earn platform fees, and give voting weight for CVX emissions. Convex takes a share of CRV earnings for all deposits on the platform. All CRV that is earned by the platform is converted into cvxCRV through the same process described above. This cvxCRV is paid to CVX lockers, to the tune of 3.5% APR at the time of writing. Convex also offers a staking option without a lock, but it earns a slightly lower APR.

Both Curve and Convex are important parts of the DeFi economy. As the DEX with the highest amount of liquidity, the returns offered by Curve and Convex are the anchor of DeFi, as many other platforms are built off of these. By harnessing boosted CRV rewards and accumulating massive voting power, Convex has ensured its longevity and ability to offer the best returns on Curve pools. This ensures long-term viability for CVX tokens, in that there will always be an income stream for them.

By offering CVX on the Midas platform, Midas opens itself to a whole new slate of potential investors and investment opportunities. As always, be careful when choosing how to invest. This article should not be taken as investment advice.

To start staking CVX on Midas platform, please visit our website at Midas.Investments.