admin
Blog — Articles — What is SpiritSwap? 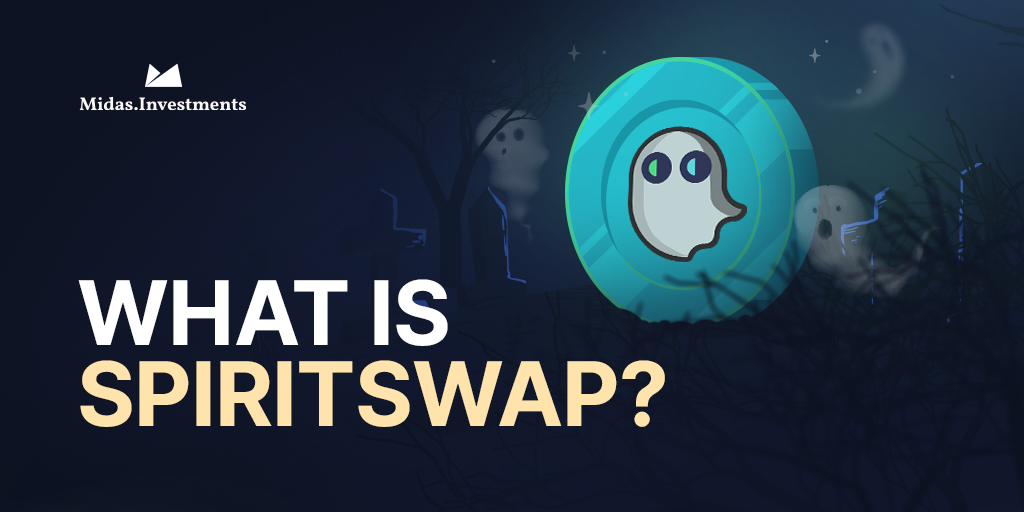 Midas has recently announced the listing of several new coins to its platform, including JOE, CVX, SPELL, SPIRIT, and others. Instead of providing rewards through Masternode earnings, algorithmic trading, or lending, the returns on these coins come from staking. These tokens are all DeFi protocols that generate a cash flow through their platforms, and distribute their rewards to Stakers.

Midas is happy to offer these investment vehicles to its users and simplify the process – managing all of the staking for you on the back end. Holders of SPIRIT on the Midas platform earn a generous 16.9% APY. SpiritSwap was one of the first variable rate listings – meaning that its APY can fluctuate with market conditions, depending on the staking rate of SPIRIT.

In this article, we are going to take a look at SpiritSwap, its tokenomics, and its integrations with Midas. Let’s get started!

Spiritswap is a decentralized exchange native to the Fantom blockchain. Its design took inspiration from the Uniswap model, but with unique tokenomics and added features. Spiritswap also offers a lending platform, and an on-chain governance structure for its token holders.

First and foremost, SpiritSwap is most known for its decentralized exchange (DEX) – and is one of the top two DEXs on the Fantom blockchain. It utilizes the AMM (Automated Market Maker) model, which pairs assets against each other in pools. The balances of the pools weighed against each other is what determines the price that the tokens trade at. A 0.3% fee applies to every swap conducted on the platform, ⅙ of which is collected and distributed to Spirit token stakers. In the past 24 hours, the platform has collected over $120k in trading fees!

Spirit is also known for its lending platform, which remains an ongoing development. The lending platform is powered by its partner Ola Finance, which offers customized lending platforms for qualified projects and teams. At time of writing, the Spirit lending network has about $2.5M of supply liquidity. Though it is small, it is worth mentioning as lending networks generate revenue through charging interest on loans.

Spirit has adopted a similar token locking model to Curve. These locked tokens offer users governance rights, as well as boosted farming rewards and protocol profit shares. Users who lock Spirit tokens can lock anywhere between 1 month and 4 years and receive inSpirit tokens in return (longer locks = more inSpirit). This inSpirit can be redeemed back to Spirit at the lock expiry. For example, locking 10 Spirit for 1 year yields 2.5 inSpirit, whereas locking for 4 years yields 10 inSpirit.

inSpirit holders have the ability to vote on Spirit token reward allocations for various farming pools. By owning Spirit tokens and locking them, you become an owner of the protocol and can decide its future. Have a favorite project you want to incentivize in the long term? Buying and locking Spirit gives you that right through exercising governance. inSpirit holders can also vote on protocol improvements.

The maximum supply of Spirit is 1B tokens, which will be reached through emissions by March of 2025. 81% of the total token supply comes from farming emissions, with 8% going to DAO emissions and the remainder in the dev fund, subject to vesting.

Midas’ integration with Spirit goes further than a listing on the platform. As a native token on Fantom, Midas tokens are also tradable on the SpiritSwap DEX!

At time of writing, Midas has over $1.7M of liquidity deposited into its MIDAS/FTM LP pair, generating over $338K of volume over the past 24H ( and nearly $1k in fees!).

Since Midas is also an owner of Spirit tokens, users can earn Spirit by staking Midas/FTM deposits in the SpiritSwap farm pool. Use this step-by-step guide. 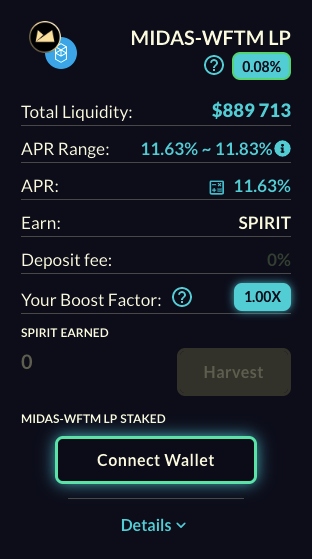 Such deep liquidity on a DEX is healthy for Midas tokens, and also gives users an alternative option to trade Midas tokens (and earn yield on your holdings!)

Note: this article is for informational purposes only and should not be taken as investment advice. Investing in cryptocurrencies carries financial risk. Please talk to your financial advisor before making an investment decision.