admin
Blog — Uncategorized — What is the difference between APR, APY and MIDAS Boost? 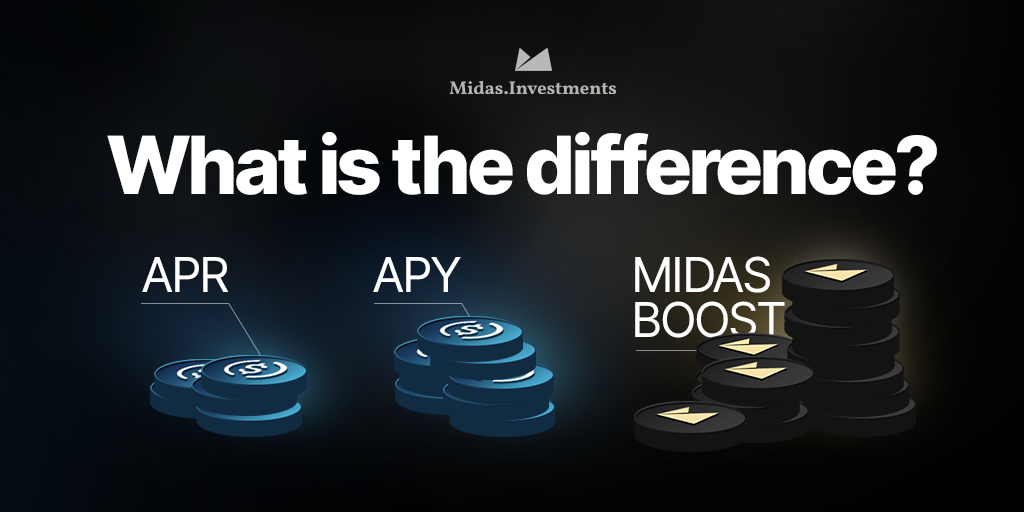 In the finance world, maybe even more than in some other industries, terminology means much. Terminology can be the difference between one concept and a completely different one, and sometimes terms that are close in structure can be on completely different ends of the spectrum. That certainly can be seen as the case with the terms APY and APR in the cryptocurrency industry in specific. Midas crypto investments platform gives breakdowns in each of its fixed assets like Bitcoin (BTC), Ethereum (ETH) and all others.

APR is one concept that is used to describe the interest which can be expected on any crypto investment on an annual basis. The term APR itself stands for Annual Percentage Rate. It is an easier term to comprehend between APR and APY because APR is simple. It refers to the basic annual rate of return paid in interest. Annual Percentage Rate is used on many traditional crypto investments platforms, while APY refers to something altogether different.

APY describes a compounded interest rate over the course of the year. Compound interest is essentially interest compounded on top of the interest as it is generated. APY is short for Annual Percentage Yield, which describes that compounding effect. Essentially APY will be higher at the end of the year if the same percentage is attributed to APY and APR. For example, if APY is 10% and APR is 10% on 10,000 BUSD. At the end of the year the 10,000 BUSD would be 11,000 in the APR scenario, and 11,050.65 in the APY.

There are several online APY and APR calculators which automatically do the calculations for individuals. APY can be generated in different terms. Some scenarios call for annual compounded interest, some quarterly, monthly, weekly, and in the case of Midas.Investments, daily generated and distributed interest. Midas also offers another incentive, which comes in the form of an even higher annual percentage yield.

Midas Boost adds additional points to the already highly competitive APYs offered to investors on the crypto investments platform. While it is subject to change at any point, the current APY boost on Midas single asset crypto staking is + .2 x the existing APY of the cryptocurrency asset. The difference in the Midas Boost mechanism is that all generated yields are distributed in $MIDAS cryptocurrency tokens, the digital asset native to Midas.Investments platform.

Midas further compounds potential rewards by offering an extremely competitive 27.4% APY currently on staked $MIDAS, so essentially boosted APY can benefit investors in multiple ways as a compounding strategy to compound underlying assets and then deposit $MIDAS received in the Midas Boost program for a further compounding strategy. Midas Boost gives investors on the evolving hybrid CeDeFi platform, opportunities to gain in multiple ways, unlike traditional Centralized Finance platforms alone, and without the overly complex Decentralized Finance protocols and interfaces.

Now that APR, APY and Midas Boost have been explained and clearly distinguished, taking a deeper look at the differences between the terms and interest-bearing equations. APR, the simplest of all 3 mathematically, refers to flat interest rates distributed to investors typically per annum, just as explained. Compared to the others, APY and Midas Boost APY, APR produces the lowest interest yield, since interest is not compounded upon, only the principle.

In the APY scenario, the compounding effect of generated interest is what makes the model superior. As interest is gained, it is added to the total amount which interest is calculated from, making it an investment mechanism that pays more than the simpler APR model. APY yields are paid daily on Midas, and therefore are even greater, due to the daily compounding effect.

Midas Boost APY would then have to take the cake so to say, as the top choice of the three, since Midas Boost enhances the already greater yields generated in the APY schedule. Midas Boost is a point of interest for any new or experienced crypto or otherwise hybrid investor. The interest generated in Midas Boost, which again, can be compounded by staking the $MIDAS token further as described above, is well beyond the typical interest rates on other crypto investments platforms and digital cryptocurrency asset managers. This creates a draw and inquisitiveness naturally just by virtue of the higher published APYs. The days of flat, less attractive interest rates in crypto are fading away, as newer protocols and ecosystems with advanced investment strategies are becoming more common to today’s savvy investors. APR, APY and Midas Boost would have been a much more difficult distinction to make some time ago when members of the public were less enlightened about what the mechanisms in cryptocurrency actually did and how they operated. Now with crypto and Google search, these terms and so much more in blockchain technology and the crypto space are becoming far less complex for retail investors to understand and partake in.

With Midas.Investments APY and Boosted APY Investors Can Earn Daily

In closing, since the clear distinction between the three has been made, a clear case for the Midas.Investments platform exists. Midas offers the highest rates on staked fixed assets amongst all contemporary crypto investments platforms. Midas investors earn interest on Bitcoin and other major crypto coins such as Ethereum, BNB, AVAX, Fantom, and the top three stablecoins – USD Tether, USDC, and BUSD, to name a few of the 23 assets currently in Midas.Investments. The already elevated APYs bring in enough interested investors, while Midas Boost elevates the compounding effect even more.

If this wasn’t enough, recalling that difference between the frequency of APY calculations, Midas.Investments generates and distributes yields every single day to investors. This is another attractive feature which adds to the case for Midas Investments being a go-to in the crypto investments sphere.